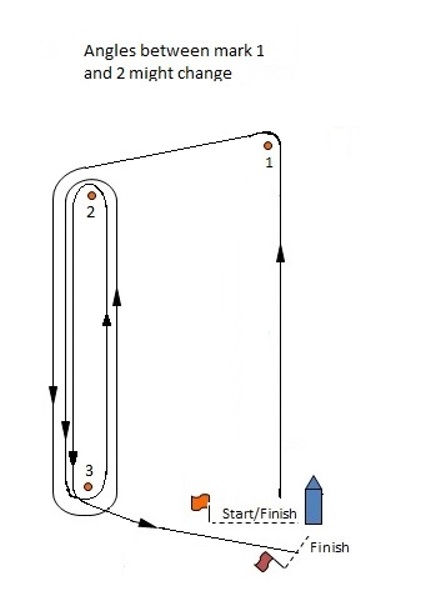 The 2021 Worldchampionship in the Flying Junior class will be held from July 26th to July 31st 2021 in Monnickendam, The Netherlands. The organizing authority is the Holland Regatta Club (HRC) in cooperation with the Nederlandse Flying Junior Organisatie (NFJO) and the Royal Netherlands Watersport Association (RNWA).

(DP) denotes a rule for which the penalty is at the discretion of the Jury.

(NP) denotes that a breach of this rule will not be grounds for a protest by a boat.

(SP) denotes a rule for which a standard penalty may be applied by the race committee without a hearing.

1.2 The “Class Rules” for the purpose of defining the rules are the “International FJ Class Rules”.

1.4 If there is a conflict between languages the English text will take precedence.

1.5 Every person on board who has its domicile in the Netherlands shall have the required license.

Notices to competitors will be posted on the official notice board(s) located at the building “De Ark” on WV Hemmeland at Monnickendam.

4.1 Signals made ashore will be displayed at the flagpole near the building De Ark of the WV Hemmeland at Monnickendam.

4.2 When flag AP is displayed ashore, ‘1 minute’ is replaced with ‘not less than 60 minutes’ in the race signal AP.

5.1 There are 12 races scheduled for the event.

5.3 The scheduled time of the warning signal for the first race on Wednesday 28 July is 10:55 hrs.

5.4 To alert boats that a race or sequence of races will begin soon, the orange starting line flag will be displayed with one sound at least five minutes before a warning signal is made.

5.6 The Championship will be valid if at least 6 (six)races will be completed.

5.7 The race committee may decide to change the racing program in accordance with the organizing committee. However, no more than 50% of the total amount of sailed races of the championship may be sailed on the same day.

Class flags will be the IFJO Class Flag.

7.1 The diagrams in Attachment A show the courses, the order in which marks are to be passed, and the side on which each mark is to be left.

7.2 The approximated time for the first to complete one race is 50 minutes.

8.1 Marks 1, 2 and 3 will be orange cylindrical inflatables.

8.2 The starting and finishing marks will be:

Starboard-end Starting Mark: The RC Signal boat with a staff or mast with an

Port-end Starting Mark: A dan buoy with an orange flag

Port-end Finishing Mark: The RC Signal boat with a staff with a blue flag

Starboard Finishing Mark A dan buoy with a blue flag

8.3 A race committee boat signalling a change of a leg of the course is a mark as provided in instruction 12.2.

9.1 Races will be started by using rule 26 RRS with a warning signal made 5 minutes before the starting signal.

9.3 A boat starting later than 10 minutes after her starting signal will be scored Did Not Start without a hearing. This changes rule A5.1 and A5.2 RRS.

10 CHANGE OF THE NEXT LEG OF THE COURSE

10.1 To change the next leg of the course, the race committee will move the original mark (or the finishing line) to a new position.

12.1 Appendix P will apply. Rule P2.3 will not apply and rule P2.2 is changed so that it will apply to any penalty after the first one.

13.1 Boats failing to finish within 20 minutes after the first boat sails the course and finishes will be scored Did Not Finish without a hearing. This changes rules 35, A5.1 and A5.2 RRS.

16 PROTESTS AND REQUESTS FOR REDRESS

16.1 Protest forms are available at the race office, located at building “De Ark”. Protests and requests for redress or reopening shall be delivered there within the appropriate time limit.

16.2 For each class, the protest time limit is 90 minutes after the last boat has finished the last race of the day or the race committee signals no more racing today, whichever is later. Participants are requested to inform the race committee as soon as possible they will protest after finishing any race.

16.3 Notices will be posted no later than 30 minutes after the protest time limit to inform competitors of hearings in which they are parties or named as witnesses. Hearings will be held in the protest room, located at De Ark, beginning at the time posted.

16.4 Notices of protests by the race committee or protest committee will be posted to inform boats under rule 61.1(b) RRS.

16.5 A list of boats penalized by the jury under appendix P will be posted.

16.6 Breaches of instructions marked with (DP) will not be grounds for a protest by a boat. This changes rule 60.1(a) RRS. Penalties for these breaches may be less than disqualification if the jury so decides.

16.7 On the last scheduled day of racing a request for reopening a hearing shall be delivered

(a) within the protest time limit if the requesting party was informed of the decision on the previous day;

(b) no later than 30 minutes after the requesting party was informed of the decision on that day.

16.8 On the last scheduled day of racing a request for redress based on a protest committee decision shall be delivered no later than 30 minutes after the decision was posted. This changes rule 62.2 RRS.

16.9 A request for a decision in writing has to be delivered within one hour after the decision is given verbally. This changes rule 66.2 RRS.

16.10 A request for correction of an error in the published results has to be delivered within the protest time limit of the last scheduled day of racing or within 60 minutes after posting of the results if this is later. When the request is not granted, the protest time limit is 60 minutes after the boat is informed that the request is not granted. This changes rule 62.2 RRS.

17.1 The low point system of Appendix A will apply.

17.2 Six races are required to be completed to constitute a series.

17.3 (a) When fewer than six races have been completed, a boat’s series

score will be the total of her race scores.

(b) When from seven to eight races have been completed, a boat’s series score will be the total of her race scores excluding her worst score.

(c) When from nine to twelve races have been completed, a boat’s series score will be the total of her race scores excluding her two worst scores.

18.1 A boat that retires from a race shall notify the race committee as soon as possible.

18.2 If any of the race signals “AP over A” or “AP over H” or “N over H” is made on a RC boat, all boats shall return to the harbour immediately.

19 (DP) REPLACEMENT OF CREW OR EQUIPMENT

19.1 Substitution of competitors will not be allowed without prior written approval of the protest committee.

A boat or equipment may be inspected at any time for compliance with the class rules and sailing instructions. On the water, a boat can be instructed by a race committee equipment inspector or measurer to proceed immediately to a designated area for inspection.

Official boats will fly a white flag with RC.

Jury boats will fly a yellow flag with Jury or J.

Rescue boats will fly a white flag with Rescue or R.

23.1 Team leaders, coaches and other support personnel shall stay outside areas where boats are racing from the time of the preparatory signal for the first class to start until all boats have finished or retired or the race committee signals a postponement, general recall or abandonment.

Trash may be placed aboard support and race committee boats.

Boats shall be kept in their assigned places in the boat park.

Except in an emergency, a boat shall neither make radio transmissions while racing nor receive radio communications not available to all boats. This restriction also applies to mobile telephones. VHF will only be used for safety communication.

Prizes will be awarded to at least the Skipper and Crew of the overall top three boats.

Competitors participate in the regatta entirely at their own risk. See rule 4, Decision to Race. The organizing authority will not accept any liability for material damage or personal injury or death sustained in conjunction with or prior to, during, or after the regatta.

Each participating boat shall be insured with valid third-party liability insurance with a minimum cover of € 1.500.000 per incident or the equivalent.

31 RIGHTS TO USE NAME AND LIKENESS

By participating in this event, competitors automatically grant to the organizing authority and the event sponsors the right, in perpetuity, to make, use, and show, at their discretion, any photography, audio and video recordings, and other reproductions of them made at the venue or on the water from the time of their arrival at the venue, until their final departure, without compensation.

The marks have to be rounded in the following order: